Granddaughter of teachers and mother to children who are already in university, her personal history encouraged her reflect on how knowledge is transmitted in school. Upset by the response to one of her children’s dyslexia, she turned towards Maria Montessori’s work. Already passionate about child psychology and neuropsychology during her studies, she dove deeper into her research, focusing on recent advancements in neuroscience and reading works about positive discipline and alternative pedagogy.

Convinced that we can only win by focusing on early childhood and that there are fundamental periods where an adult’s response to a child’s thirst for knowledge should be to fulfill the child’s needs. Rather than ending her research, she decided to further study Montessori pedagogy with Sylvie Desclaibes.

English assistant in the 3-6 year class.

Originating from Wales with a Bachelor’s degree in English from the University of Wales, Gabrielle also holds a TEFLE diploma (Teaching English as a Foreign Language) with a specialty in child psychology.

She taught two years as a primary and preschool substitute teacher in the United Kingdom, and then as an English teacher in Dubai, Cardiff and in France.

Her education and professional experience familiarized her with learning through play, verbalizing emotions, and positive discipline. She also took a Montessori class before joining the “Petits Bateaux” team in September 2018.

Dynamic, spontaneous and sensitive to children’s needs, she has lived in France for several years but only speaks English in our school. She works with Anaïs in the 3-6 year old class and focuses on children’s psychomotricity, manual work, and artistic activities.

English assistant in the 3-6 year class.

After growing up in Ohio, Mary Elise graduated from Wittenberg University in Springfield, OH (USA) with a bachelor of arts in education with a focus on special education and a minor in French.

As a student teacher in an inclusive kindergarten classroom in Ohio, she helped put individualized education plans into place and adapted lessons for students with mental and physical disabilities. Then she became a classroom preschool teacher and home visitor in Minnesota where she worked for HEADSTART, a social program that helps families in poverty.

In France, she obtained a TOEIC certificate and taught English to adult students in different enterprises. She worked for two years for the “Inspection Academique du Calvados” as an English teacher for several elementary schools in Caen. She then worked in a bilingual nursery.

Passionate about early childhood education, in particular for students who struggle in a traditional education system, she also worked as a camp counselor and team leader in an American summer camp where she gained experience leading activities; focusing on art and ecology as well as educational games.

Mary Elise is joining the “Petits Bateaux” team in 2019. She will help Émilie in the second 3-6 year old class at our school.

Starting in September 2019 she will be teaching English workshops for children from 3 to 18 years old. 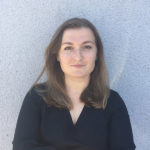 After a hypokhâgne in Caen and obtaining a degree in Spanish at the University of Granada, Gabrielle joined the MEEF master’s degree in Saint-Lô. After her tenure, she was a school teacher in several schools in La Manche, from MS to CM2.

BAFA holder, Gabrielle has supervised many leisure centers and particularly appreciates team sports and acrosport sessions with children. She attaches great importance to motor skills sessions and the values of sport, which bring a lot to children in the knowledge they have of themselves, the management of their emotions and communication with others.
Gabrielle also attended ESAM workshops for the general public in Cherbourg, in order to offer children a rich artistic approach, leaving an important part to their creativity: land art, charcoal, engraving, modeling, Indian ink …

Trained at the Sylvie d’esclaibes Montessori Institute, she devoted her thesis to learning mathematics in cycle 3 in the form of Montessori workshops. Frustrated, however, in her daily practice within the national education system, she decided to join our school, in order to implement this pedagogy in which she believes so much, to benefit from the virtuous effects of multi-age, to meet the need for sense of its students, to individualize their progress and encourage them to express themselves by giving them the right tools to achieve it. 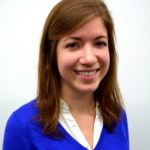 Originally from Chicago, she graduated with a Bachelor in Sustainable Development, French and Italian at Trinity College, then a Masters in Sustainable Development at the Institute of Hautes Études Internationales et du Développement in Geneva. After some experiences in the United States and Switzerland in communication around the challenges of mobility and ecology, Claire taught English in France in primary, middle and high schools, but also for adults and younger children, before settling in Cherbourg.

Claire’s bilingualism, her openness to other cultures, as well as her interest in raising awareness of eco-citizenship and pedagogy naturally join the values of our school.

In addition to its essential support role for children in the 6-12 year-old class, it provides English courses offered during school holidays, as well as intensive English courses for middle and high school students. 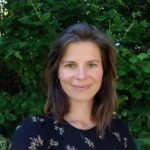 Occupational therapist since 2006, Estelle has worked in hospitals, rehabilitation centers, and in private practice.

Her in-depth knowledge of “DYS” disorders, fine motor skills, the autism spectrum and ADHD in children is of great value to our team, which Estelle joined in order to supervise the reception. children requiring specific support.

Estelle also trained for a year in Montessori pedagogy at the Sylvie d’Esclaibes Institute.

Co-founder of the school, music teacher.

With a diploma in private law from the University of Caen, Séverine obtained her CAPES (a French teaching certificate for middle and high school) in 2001 and became a principal education advisor around Paris and then in the Cotentin region during ten years.

After becoming an intermittent artist, she released two albums as a singer and performed several times on stage notably as a warm up act for Thomas Fersen, Clarika, Joyce Jonathan…

However, her great interest in education never decreases, on the contrary! She closely follows the Gennevilliers experiment led by Céline Alvarez, researches and studies Maria Montessori’s method, and deplores the absence alternative schools in her hometown.

Artistic and athletic, Séverine is convinced that play and pleasure anchor learning longterm and develop curiosity and creativity in students. A school’s mission is so much more than simply transmitting knowledge, it is also to teach children how to regulate their emotions, how to have healthy relationships with others, and to respect the individual personality of each student.

Very involved in the schools pedagogical orientation, Séverine sees the students each week, most notably to insure the presence of musical and artistic activities in the school.

Daughter of professors and granddaughter to teacher, Fanny was exposed to educational conversations at an early age. Surprised to see a growing number of Montessori schools near her home (in the Paris region) and the total absence of them in the region where she grew up and still loves, she decided to create the “Petits Bateaux” school in Cherbourg with her sister Séverine and Émilie Reyrat.

While earning a degree in literature (Paris VII) in 2003, Fanny also took acting classes in Paris (Cours Florent). She then managed the development of two audiovisual production societies.

After winning the “Concours Universitaire de la Nouvelle de France” (a French University short-story contest), she published her first novel in 2011 through the Albin Michel publishing house, UNE JEUNE FILLE AUX CHEVEUX BLANCS (Winner of the Charles Exbrayat award). She wrote an adaptation with the title LES BEAUX JOURS (with Fanny Ardant) and pursued her career as a film scenarist. In 2019 she published her new novel, LE BERCEAU, through Flammarion publishing.

Passionate about writing, Fanny participates in school wide decisions and comes as often as possible to observe the students progress. She is always moved to see them flourishing.